All Aboard: The Polluter Pays Principle and the Highs and Lows of Carbon Offsetting 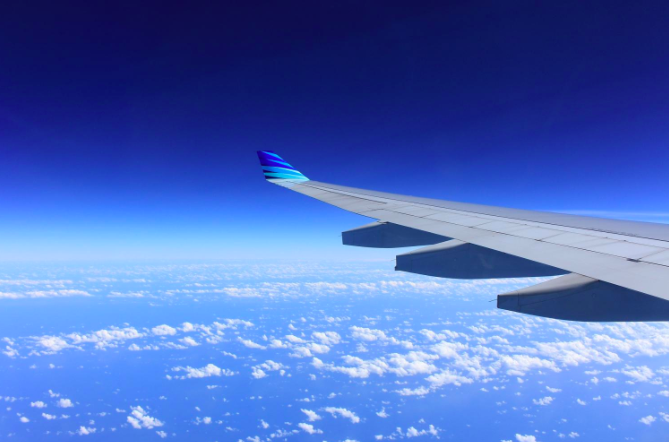 Flying. For long distance travel, it is often easier, more comfortable, definitely faster and also cheaper than other transport methods. If only it was not so bad for the environment: air travel is responsible for 3.2% of all CO2-emissions. And this considering that only an estimate of 20% of the world’s population has flown at least once in their lives. One flight from Zurich airport to Larnaca, Cyprus is worth one ton of CO2. For the same amount of CO2 emissions you can take the TGV (train) 260 times from Zurich to Paris and back. 1 ton per person each year is all we are allowed if we want to keep climate change at bay. 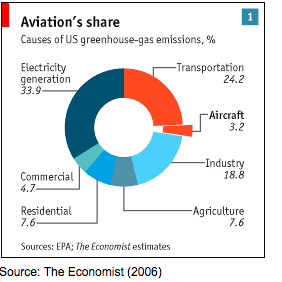 A quick and easy solution proposed by many? Carbon offsetting. It is defined as “an action or activity […] that compensates for the emission of carbon dioxide or other greenhouse gases to the atmosphere”. When buying a plane ticket, you are often asked to pay a voluntary compensation for the CO2 you are releasing into the atmosphere. You pay a fixed amount to an offsetting NGO, which then invests the money in one of their climate protection projects, which often focus on clean renewable energy development, energy efficiency or the capture of already released

into the atmosphere. You pay a fixed amount to an offsetting NGO, which then invests the money in one of their climate protection projects, which often focus on clean renewable energy development, energy efficiency or the capture of already released carbon through tree planting. To offset one ton of CO2 at the Swiss carbon compensation NGO myclimate costs 14 CHF. However, can offsetting companies really compensate for the emitted CO2 or is it just a drop in the ocean? An analysis of the controversy looking at the big actors –  the aviation industry, international organizations, environmental advocacy and offsetting NGOs, scientists and individuals: 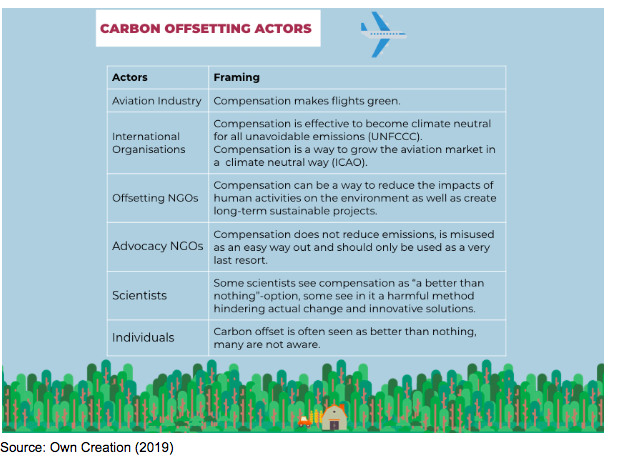 Offsetting as a fair climate solution?

The aviation industry supports nearly 57 million jobs and represents $2.2 trillion in GDP. It allows connection and mobility to remain accessible to many workers, students, travellers of the globalized society. With these benefits comes a responsibility to ease the environmental impacts of flying, says the United Nations.

A position paper released by the “Global Aviation Industry” in 2013 stated that offsetting carbon emissions “would be the quickest [option] to implement, the easiest to administer and the most cost-efficient”. Illustrating this position, many airlines recently developed schemes, some successful. Virgin Australia, for instance, developed its Fly Carbon Neutral program, the first airline carbon offset scheme to get government certification. By 2017, it was proud to have offset 4 million seats along with 500,000 tonnes of carbon emissions.

Many international organizations support offsetting. 2015 UN initiative Climate Neutral Now calls on individuals and businesses to offset unavoidable emissions. In 2016, the International Civil Aviation Organization, the UN agency which codifies the principles of international air navigation, adopted the Carbon Offsetting and Reduction Scheme for International Aviation for States to achieve carbon neutral aviation growth from 2020 on. Offsetting is considered to be an immediate and economically advantageous environmental solution by most governmental actors in different positions.

Many non-governmental organizations, which are not hindered by short-term financial objectives and can devote themselves more fully to issues such as climate change, also consider offsetting by aviation favorably. For them it can support the Sustainable Development Goals, as it fosters investments in projects which contribute to improving lives in communities (sustainable energy, forestry, education etc.). Some NGOs, such as myclimate, propose expertise such as emissions’ calculation and voluntary offset measures to aviation businesses and passengers. 80 NGOs develop offsetting projects according to the standard and certification body Gold Standard, which not only monitors GHG reductions but also certifies projects’ against sustainable development criteria.

According to a large part of the scientific community (e.g. the March for Science), addressing climate change involves, next to developments in businesses (e.g. technology), also individual lifestyle changes. Buying travel offsets for individuals is considered to be a better than nothing option. Though unable to reduce emissions to zero on its own, it encourages everyone to do something for the climate.

Compensation as a quick-fix with harmful consequences?

But carbon offsetting is a controversial topic: a variety of actors are sceptical or raise serious concerns. There are two different levels of criticism: firstly, criticism is aimed at the way the offsetting is conducted, i.e. how NGOs measure the emissions or how climate projects funded. Secondly, there is fundamental criticism behind the idea of offsetting. Even if implementation criticism was addressed, the question remains: is offsetting actually doing more good than bad? The UN says that carbon offsetting is rather a complementary measure than a ultimate solution to climate change. It calls on individuals and businesses to become climate neutral, first and foremost, by reducing all greenhouse gas emissions as much as possible and only offset the emissions which cannot be reduced. This prioritisation shows that international organizations do not perceive carbon offsetting as the quick fix to climate change.

On this point large environmental advocacy NGOs such as Greenpeace, World Wildlife Fund (WWF) and Friends of the Earth agree. In a joint statement they formulate the downsides of carbon offsetting. Since it does not reduce emissions but only moves them from one sector to the other, they argue, similar to the UN, that carbon offsets should only be “a last resort” when all other measures to reduce emissions have been exhausted. Taking a critical watchdog position vis-à-vis governments, international organisations and businesses, the NGOs criticise that purchasing offsets can be misused as an “easy way out for governments, businesses and individuals to continue polluting without making changes to the way they do

business or their behaviour” with detrimental effects. Additionally, NGOs have criticised some climate-projects financed through carbon offsetting.

Substantial criticism also came from parts of the scientific community: Some pointed out that offsetting is often mistaken as mitigation, thereby lowering incentives and innovations to lower-carbon technologies and practices. As a consequence real mitigation of emissions could be hindered.

The solution to it all?

Considering that climate change is one of the greatest challenges of the 21st century, it is striking that the method of carbon offsetting is not on top of the public agenda. The controversy remains within silo-communities of experts, academics, NGOs and especially climate-conscious members of society. The accompanying complexity (negative effects) of carbon offsetting are not very widely known. The major triggers of the controversy have been a strong push by the aviation industry and the UN’s promotion of carbon offsetting as a means to combat climate change as well as the increasing take up by travellers. It remains to be seen if the controversy will attract more attention with growing civil society movements such as the climate strikes “Fridays for Future”. But looking at the broader picture, is the question really about offsetting or rather about making radical changes in society, i.e. not taking the plane?

One of the major challenges of sustainable development is the persisting dichotomy between profit and environmental stewardship. The idea that we cannot ensure economic prosperity while also actively caring for the environment is deeply wedged in the very pillars of the modern world. Initiatives like carbon offsetting are more to the Zeitgeist than to solving the existential threat (climate change) that concerns us all. To put it simply, it is not about the question of offsetting but about the question of changing individual behaviour and avoiding plane rides. Overall, chose wisely when deciding to take a plane or staying on the ground might be the best option.